Seismic exploration for oil involves sonar cannons firing loud explosions every 10-15 seconds. 24 hours a day. 7 days a week. It’s like dynamite going off in your loungeroom. Over and over and over.

It can kill scallops and tiny zooplankton more than a kilometre away. It can damage whales’ hearing and keep them away from key feeding and breeding grounds. It could even affect the immune system of lobsters.

Despite mounting evidence of the impacts on our marine life and fish stocks, deadly seismic blasting is still allowed in most of our marine parks, and in the breeding, feeding and resting areas of Australia’s unique and diverse marine life. 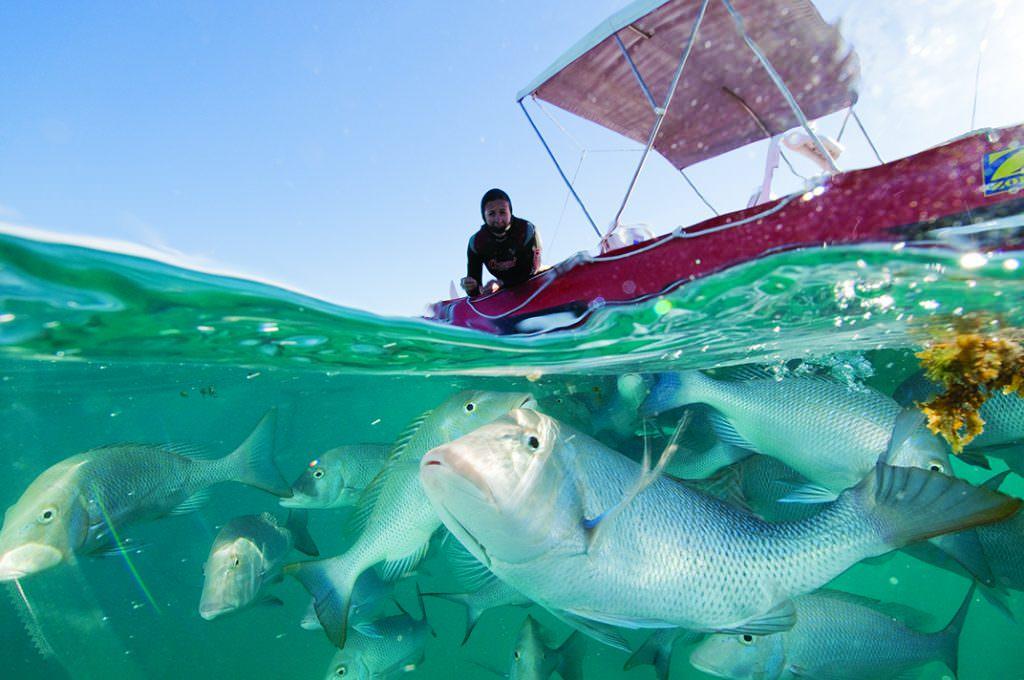 Right now, the oil and gas industry is expanding around Australia. Most recently seismic blasting has been given approval in the whale-rich waters of the Great Australian Bight, the iconic Kimberley coast, the scallop-rich waters of Bass Strait and the fishing haven off Newcastle’s coastline.

Soon it will expand to one of the last intact tropical marine environments in the world – off Australia’s Top End.

Coastal communities, scientists, recreational fishers, commercial fishers and the broader public are deeply concerned about the impacts on our marine life and local fisheries.

Tens of thousands of Australians have raised the alarm. Together, we are calling for a ban on seismic testing in all of Australia’s marine parks and in areas that are critically important for the survival of marine life that are vulnerable to the devastating effects of seismic air blasts.

How loud is seismic blasting to marine life?

Marine animals use sounds every day to communicate, navigate and find food. Underwater noise from human activity is not what they need to hear but it’s getting louder and louder.

If we approach a jackhammer making noise at 100dB, we can quickly pass by. We can also switch off a power saw at 110dB and make sure we avoid Howitzer cannons at 180dB. Marine animals are not so lucky – and the noise generated by seismic airguns reaches 250dB. That’s 32,000 times louder than jackhammer noise.

When the survey ships of the oil and gas industry arrive in an area, they will be towing an array of up to 40 airguns that will expose the marine animals living there to a seismic tsunami of noise.

The airguns blast compressed air into the water column every 10-15 seconds over days, weeks or months across 100s to 1000s of square kilometres. The noise can be detected underwater almost 4000kms away. From 2014 to 2015, the monthly average area of Australia’s oceans blanketed by seismic blasting was more than 5000km2!

What impact does seismic blasting have on our marine life?

For many years the oil and gas industry has told us that seismic noise doesn’t affect marine animals. But there is a growing body of scientific evidence that proves it does.

Whales are known to change direction, alter their song patterns, reduce feeding and suffer increased stress during seismic surveys. There are also indications that seismic noise can affect whale hearing and lead to strandings.

At the other end of the ocean food chain is zooplankton, which includes krill, the staple food of baleen whales. Australian scientists have recorded two- to three-fold increases in krill deaths up to at least 1200 metres from the airgun blasts and substantial impacts within 15 kilometres.

Less zooplankton in an area would affect the fish that feed on them, as well as the animals, such as diving seabirds, that prey on those fish.

Although no research has been conducted on the effects of seismic noise on penguins in Australia, scientists have observed African penguins avoiding normal feeding areas during seismic surveys.

It is also possible that seismic noise could be implicated in the disappearance of sea snakes on critical reefs in the North West Shelf off Western Australia.

There are many questions about the impacts of seismic noise on marine animals that need answers including: ‘What happens to the animals injured by seismic noise that become less able to find food, more vulnerable to predators and struggle to survive in the wild?’.

What impact does seismic blasting have on Australia’s commercial and recreational fisheries?

Australia’s commercial and recreational fisheries rely on healthy oceans and are important to many local coastal economies. But recent scientific research has shown that some of the species they target can be affected by seismic noise.

The abundance and catches of some fish species, such as gummy shark, have declined due to seismic noise. Schooling and spawning may also be negatively affected.

In Port Lincoln, commercial tuna fishers are concerned that seismic noise in the Great Australian Bight will cause southern bluefin tuna to alter their migratory path, taking them out of reach of fishing boats.

For commercial scallops and southern rock lobsters, which support Victorian, Tasmanian and Bass Strait fisheries, seismic noise has been shown to change their behaviour and compromise their immune systems, while death rates increased among scallops.

This ground-breaking research also revealed that seismic noise reduced the rock lobster’s tail-extension reflex. That makes it harder for lobsters to right themselves when turned on their back but easier for predators to catch them.

Research overseas has shown that oysters can be impacted by seismic noise. Fishers of the world’s largest and rarest pearl oyster found off the Western Australian coast at Broome are concerned that seismic surveys will undermine their fishery. A major three-year study is currently underway to measure the impact.

Species that school or come together to spawn, such as blue warehou, eastern gemfish and orange roughy, may in future be vulnerable to seismic noise. Having each experienced population collapses, stock rebuilding could be undermined by seismic surveys during schooling and spawning.

Finally, the impacts of seismic noise on zooplankton, the foundation of ocean food chains and the prey of targeted species, are also concerning to fishers. In Canada, commercial fishers have called for a ban on seismic surveys after a sustained five-year drop in zooplankton in areas where they had occurred.

Say NO to blasting the Shoals

Destructive seismic blasting could happen on the doorstep of the pristine Rowley Shoals and Mermaid Reef Marine Parks, off Western Australia’s Kimberley coast. Sign the petition to protect these precious marine icons.
Sign the petition

Get the latest news

Subscribe to receive the latest news and campaign alerts from Save Our Marine Life.

We acknowledge the traditional custodians of the land on which our offices stand and we pay our respects to Elders past, present and emerging.